Buffalo and Printing (Notes from the studio December 2013)

A Beast for the Eyes

I am so happy that I decided to produce some work which stemmed from Buffalo. Some experiences reverberate in such a way, the original moment has so many facets that we have to return to it. I filled a couple of sketch pads with studies and this preoccupation pleasingly resulted in a large painting and a lithograph, made in a very unusual way, that now feature in the exhibition.

The large Buffalo painting came about on one strange day when I had struggled for many hours trying to lay the foundations for an epic canyon scene. Eventually I became really frustrated, what had taken me a good while just didn’t maintain the potential it had at various earlier stages. I was on the verge of putting my feet up but there’s nothing more annoying than leaving the studio after a full day, with what feels like nothing to show from it. I decided to use the board to try a buffalo work, much larger than the sketches. 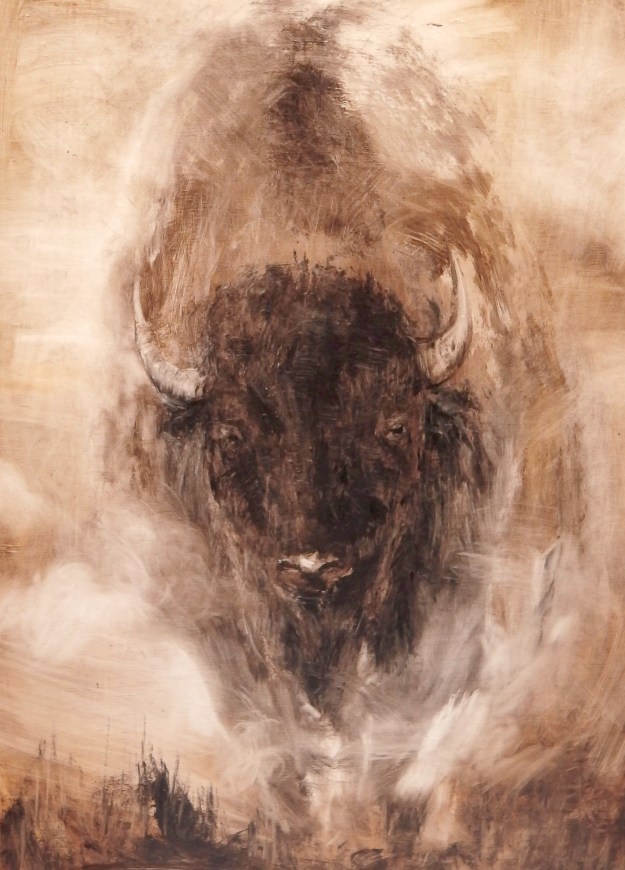 The resultant piece is a mysterious combination of a formal portrait of the Buffalo’s head and an evocation that it is running or walking towards the viewer through kicked up dust. The Buffalo stares directly at the viewer and maybe initially it feels like a confrontation but I wanted this to subside into a connection that would enable a more subtle experience of a full range of emotions. I had originally planned to layer this work with colour but after some time I was certain that any addition would only detract from the fresh qualities in this first meeting. It was very reassuring to have this powerful presence in the studio until all the work was framed.

Back to the Kitchen

The printmaking days at Bolton University enabled me to revisit the roots of my painting process. After my early return to monoprinting, the supervisor of the Printroom, John Wineyard, mentioned a few new process which have evolved from the push towards safer non toxic printing, one of these was called Kitchen Lithography. It has been developed in 2011 by the French Printmaker Emillie Aizier(http://www.art-emilion.fr/index.php?id_article=125), and gets its name from the use of basic household substances such as Soap, Tin Foil and Cola to recreate the same chemical interaction used by conventional Lithography.
I became a little obsessed with this process, I found it unpredictable and challenging. I never really mastered it, so there are many more videos on you tube which would be more helpful than a tutorial from me. It was amazing to realise that printmaking is constantly evolving and for me experimenting with new techniques had a very positive effect on all the other work.

The image is made on foil using a greasy substance, I painted with printing ink. Then cola is allowed to sit on the surface of the foil for a number of minutes, it reacts with the greasy areas in such a way that when the cola and ink have been removed a magical ghost image is left on the foil. Water is then applied to the foil and when ink is then carefully rolled onto the foil it sticks to the original drawing whilst being repelled by the other areas. This is then passed through the press transferring the image onto damp paper.
I never really felt fully in control of each stage, in terms of the science and had many failed experiments. I was rewarded with two great days where everything seemed to go right. I created this image of the rock formations of Green River. If you look closely on both examples you can see the creases caused by the tin foil going through the printing press. 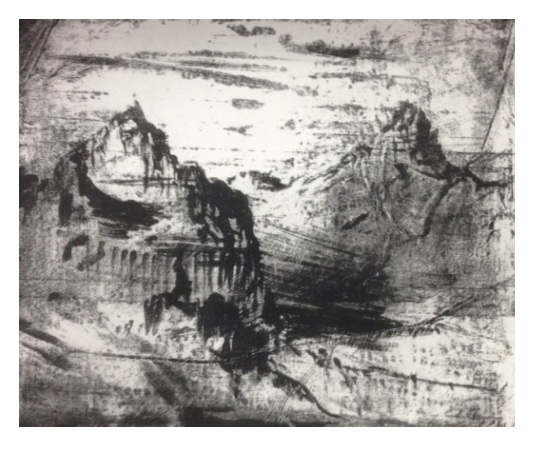 The second big success now sits quietly in the exhibition and appears a little like a vintage photograph of a buffalo head in profile. I love it because it felt like a hard won technical achievement with the new process. It also represented a special time, approaching Christmas, when the whole project had diverged into many different areas of enquiry, all bubbling away moving more confidently towards the culmination, the Green River works and some very big paintings. 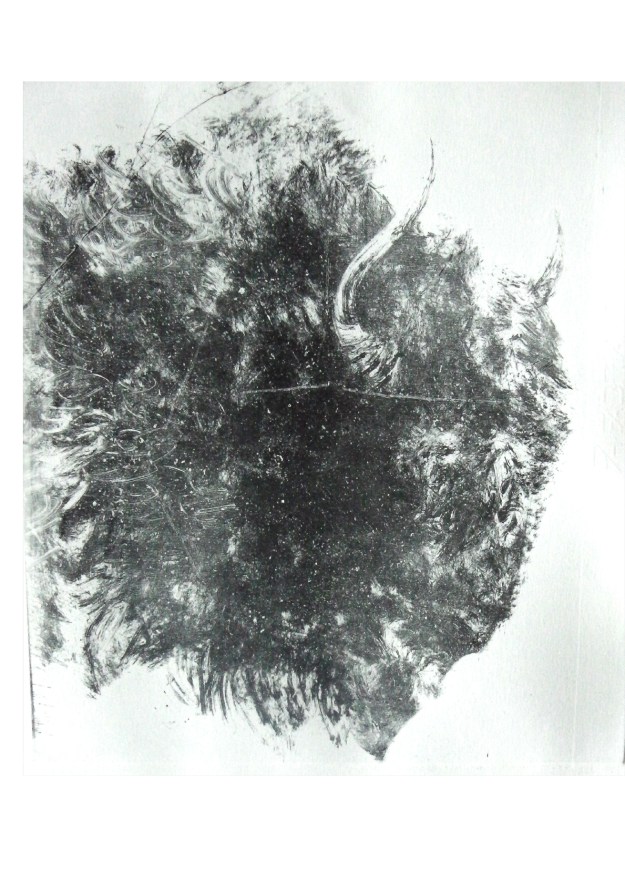