Final Reflections on the Project

by jamesnaughton | Mar 15, 2016 | Final reflections, Moran and Me, Naughton and Moran, The Exhibition | 3 comments 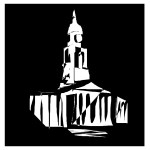 A long time to reflect

I thought I’d give myself some time to reflect properly but certainly not as long as the time since my last post. In wanting to communicate some idea of the project having a lasting impact on my work only patience has suggested what the effects are and might be in the future. The blog has helped enormously in recording and sharing some of my most treasured memories. I have mixed emotions about concluding it, even now, so long after the end of the exhibition.

I did enjoy many visits to the gallery over the course of the exhibition. I feel extremely lucky to have been able to work with such thoughtful dedicated individuals, at every stage, who contributed to make the exhibition so engaging. Each moment spent in there was special, whether it was the tranquility of being entirely on my own with the works, or the space reverberating with the hub bub of visitors from Bolton and much further a field.
I must also mention the many school visits I undertook which have hopefully guaranteed the next generation of Bolton Artists are as excited about Art and Moran as me. Working with the children who visited the exhibition has been such fun and further emphasised it’s appeal to a very broad audience.

What started with a simple inclination to visit the site of one of my favorite paintings was actually like pulling at a tiny loose thread of an elaborate tapestry. As the yarn has unraveled I’ve discovered an intricate layering of time, visions and voices. Essentially the project was a chance to reevaluate Moran’s influence on me, whilst also learning much more about his era and why he produced the art he did. A natural curiosity to compare this knowledge to my own experiences and depictions of the same subject, during and after the trip,  resulted in a much deeper understanding of my painting as well the role of art, both in the period it is produced and as those circumstances change.  I was struck that, although Moran was “employed” to record facts, he was able to fulfill his commitment to the task as well as re imagining what he saw to create great Art.

I’d placed Moran and other influential artists in a little “hero” box many moons ago, easily listed and referred to but rarely given fresh thought. At some point, during those many years, the dream to paint like him had imperceptibly given way to the desire to paint like me. I suppose it’s the true calling of any artist, to actually create something that links to an inherited tradition but is also new, in reflecting their own experience, memories and imagination.

In the heart of the the project I have slowly transformed  a sentimental nostalgic view of Moran as an artist into a mature appreciation of him as a man. This process has been strangely melancholic at times but necessary and liberating. The era was always alive in my imagination but it now feels much closer in an unexpected way. It’s as though I started building a bridge over a chasm of history between me and Moran. Possibly due to the incredible shifts in painting which seemed to separate us but as the project went on, the bridge became smaller and smaller. We all grow in our appreciation of the challenges that life can throw at us,  and I believe, with experience, we yearn to know that our heroes were human too and then their achievements become all the more real and substantial, truly heroic.

When I first started on this project I thought I might unearth some hidden gems of information about Moran’s link’s to Bolton. I had a naive idea that he may have harbored a sentimental connection to the town of his birth. Although he did visit a number of times and the town must have been very proud to reaffirm his roots with a very successful exhibition, it is equally clear that Moran rightly a son of America. I doubt he could have embraced his creative opportunities to successfully depict The West had he not felt such ties with his new home.

Having said that I do think that the link with Bolton is something that the town should celebrate wholeheartedly. It occurred to me that the connection belongs to everybody and is kept vibrantly alive in great events, like the exciting acquisition of “Nearing Camp”,  for the people in the town to view whenever they want and imagine what is possible. In my efforts and the actions of everyone who helped and encouraged me there seemed a deep understanding of the importance of these bonds which enrich our lives, day to day and in future.

The Mystery of Painting

The project’s effect’s have emanated into my paintings in surprising ways. Most notably, I have a much clearer sense of where my art sits into the grand scheme of things. I am one of a number of painters, working today, who is very happy to make a commitment to traditional subjects such as Landscape and an ongoing relationship with paint. I now understand that what can result from this process is an enigmatic alchemy, where the paint not only describes recognisable elements to produce an “image” but the handling of the paint itself can also mysteriously portray the nature of the the artist, simultaneously. How many times do we hear that looking at an original work, in the flesh, is utterly different to seeing a reproduction in a book? In a book, we only see the image and nothing of the secret language of the paint. The true beauty of this organic relationship is that it will always be in transition and a mystery, affected by events in an artist’s life and is as unique to each individual as a snowflake.

“The most beautiful experience we can have is the mysterious. It is the fundamental emotion that stands at the cradle of true art and true science.” Albert Einstien

Ripples on a Pond

Perhaps more directly I can feel that this new found awareness is giving me confidence to  work on a large scale again, as well as being more experimental in the way I work with the paint. A number of works I have completed, based around the theme of a cave entrance, have grown directly from the seeds of a couple of pieces in the exhibition and these are a new direction that will occupy me for some time. 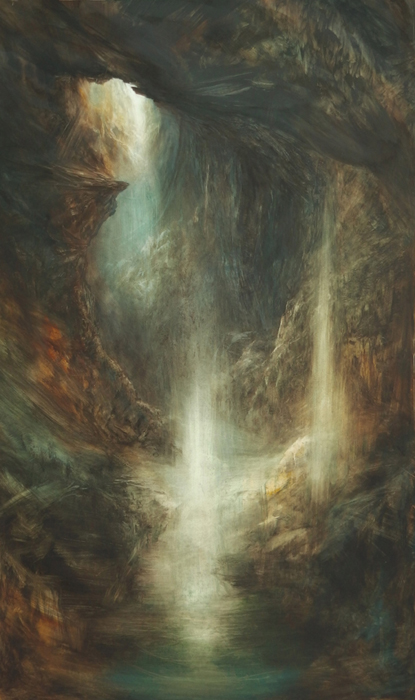 I have also returned to subjects which established my reputation, representing the British Isles, even in this work I can feel the influence of what happened in America. I have metaphorically and literally expanded my horizons. 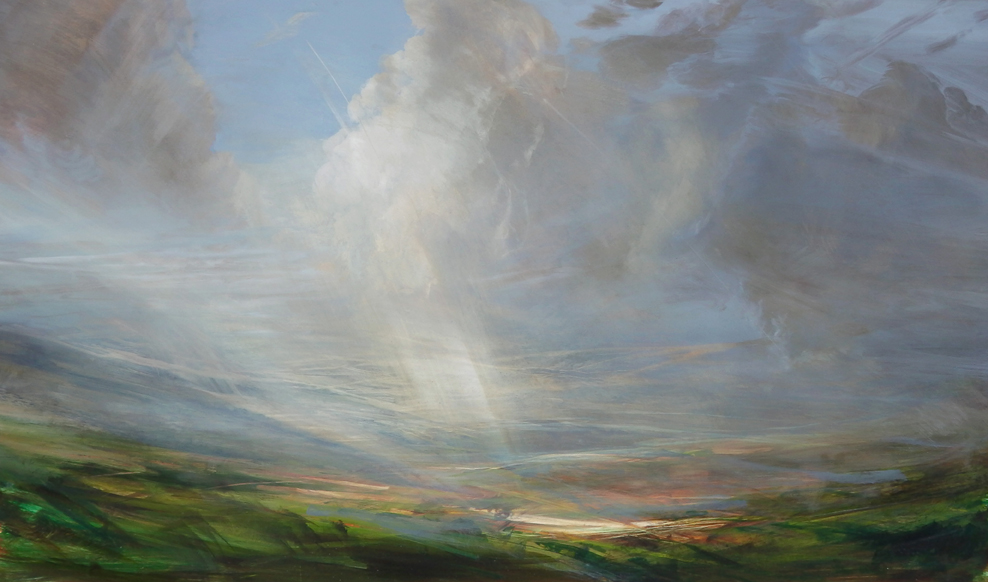 I was really keen for the exhibition to be seen in America but alas the logistics of transporting the whole show made such an ambition impossible.

All is not lost, around this time last year I became aware of an Art residency program in Jackson, organised by the studios Teton Art Lab. They invite applications from artists annually and select twelve, to make work in Jackson for one month of the following year.

I am delighted to say that I have been chosen to take part in the project during April this year. I can only guess what may emerge this time. I do intend to record events again in a separate blog that will be published on my website www.jamesnaughton.com.

So this seems like a perfect time to draw the curtain on this record. I do still hope to eventually add all the little bits I’ve promised, that were features in the exhibition along with collections of sketches but for now this is my final written post. I also plan to move the whole blog on my own website at some point soon.

Thank you to all the followers of the blog. Your support has been crucial to it becoming such an integral part of the whole project.

Thank you so much to everyone helped with this project in anyway. The most wonderful aspect of this experience has been how warmly people have embraced the chance to get involved and make it special.

Last but certainly not least to Thomas Moran himself who’s life and Art made me dream of adventure, thank you. 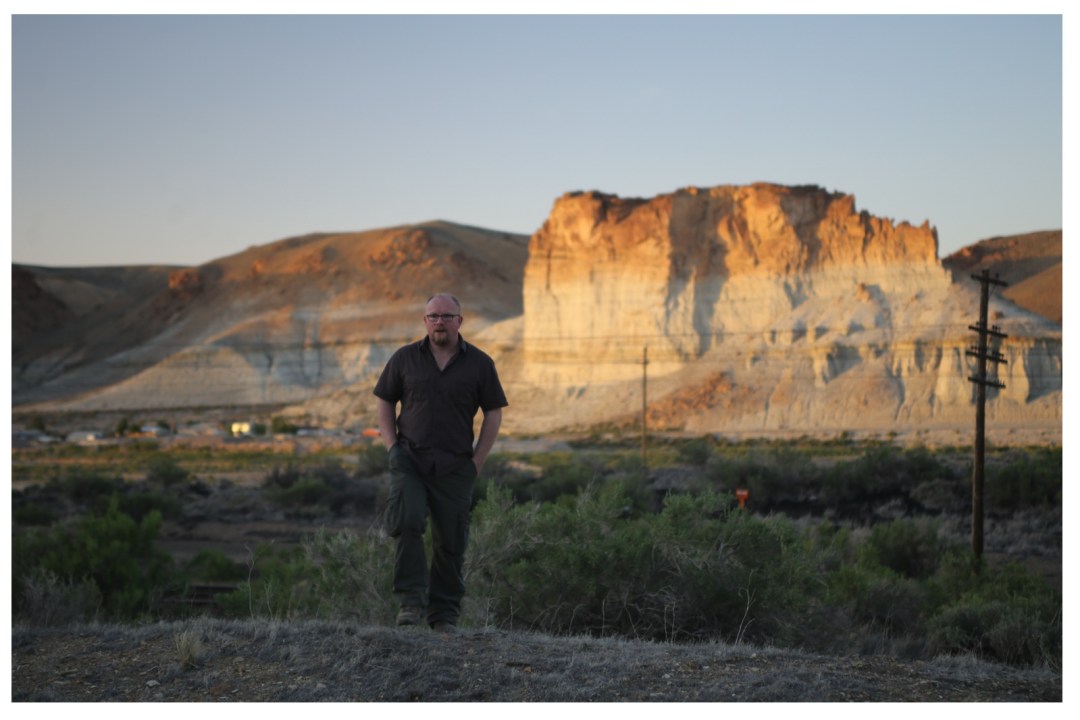