Big Foot.  A couple of the hikes that take you closer to the mountains are still under about 4ft of snow. In places this is packed hard and you’d be able to walk on it in hiking boots but after trying this I discovered some sections are less compact and your find yourself up to your waist! It’s comical initially but it doesn’t take long for the amusement to transform into considerable discomfort.
I was talking to a kind gentleman at the local thrift/charity store about this predicament and as luck would have it he had a pair of snow shoes(apparently they don’t come in that regularly). I must have looked slightly puzzled as I was fully expecting them to be like tennis rackets with straps. It turns out they haven’t looked like this for a long time. I quickly did my rudimentary mathematics and realised that I would only have to use them twice to make it cheaper than hiring a pair. So I now own a pair of snow shoes. 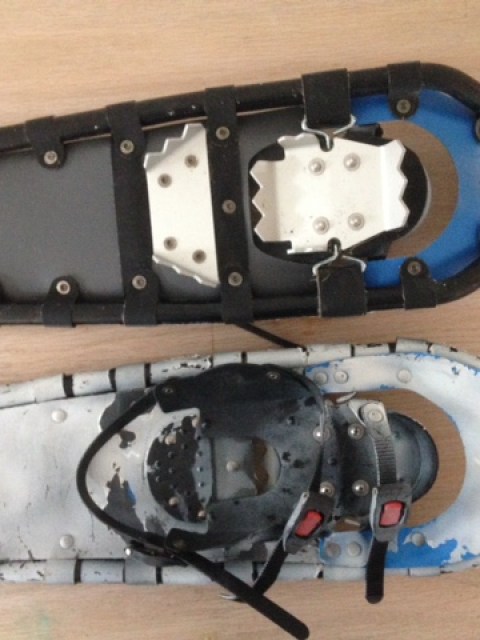 Strange to think about it now that I’m a seasoned snow shoeman but I went into the National Park visitor centre to ask for advice on the trail, I had planned, also how to actually walk in the shoes? I was directed to Taggart Lake and told to just walk in them normally, unless on an steep incline then go toe first to give more purchase.

Now, this is going to sound ridiculous as you’d imagine that just walking, with an increased distribution of weight, would be more cumbersome and annoying than just the straight forward walk. It happens to be incredible fun. I’ve not worked out whether it’s either, the deeply felt inherent link to our ancestor’s only way of traversing very deep snow, or just the smug satisfaction that the only people you will meet on the walk will either be fellow snow shoe aficionados, cross country skiers or wild animals. 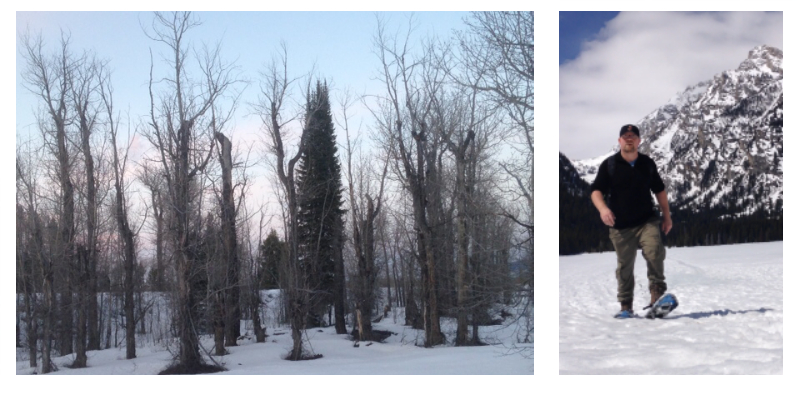 Although I’ve skied before, I’ve never just walked in these severe winter conditions. Utterly bewitching, in its beauty but with a flavour of the danger that would accompany survival in such conditions and also the day to day practical use of this ingenious footwear by people’s living in such harsh winters. It’s important to remember that certain populations have been using this mode of winter transport for thousands of years, so I’ve no doubt we all still carry a sub conscious familiarity with it. This Wikipedia page is a perfect guide to every aspect of Snow Shoes-
https://en.m.wikipedia.org/wiki/Snowshoe#Origins
The views of the mountains are spectacular. Upon reaching the lake I decided I’d earned a cup of coffee from my newly christened flask was surprised to find cross country skiers making their way straight over the middle of it. I did this hike on the Moran project a few years ago which is what made the walk so interesting, to compare memories and see it in such a different seasonal demeanour.
I’m looking all the time, these majestic peaks are full of character and I enjoy just isolating a small section for what feels like a journey into them. It is these flights of fancy, similar to walking in the shoe shoes which all combine together to create the perfect mixture of experience and imagination when I return to the studio.

A panorama from my day snow shoeing.

As you can see from the photos it’s a glorious day and as I return to the car I’m starting to wonder how I’m going to manage to get my new footwear into my case going back to the UK, as they are the best souvenir of a perfect day.