“The cave you fear to enter holds the treasure you seek.” Joseph Campbell

The Cave theme is a relatively new one for James. He had an idea to enter the New Light Open Art prize in the summer of 2015 and used this opportunity to develop pieces based on a the entrance or exit to a Cave. In small studies he soon became aware of the potential power and dramatic light these images could evoke. Two large paintings were chosen to feature in the prestigious exhibition at the Bowes Museum in Barnard Castle, County Durham in the UK. One of the Paintings, “Cavern” Featured in the gallery below was chosen by visitors to the exhibition to receive the “Public Choice Award”.

“Light is a recurrent theme in all my paintings. The cave work emerged from a notion of an intense light entering complete darkness. Immediately this started to fire my imagination, how could I use the paint to suggest forms and textures which might enable the viewer to construct their own space? I was also aware that the cave images might resonate deeply in the sub conscious, due to their different meanings in mythology the world over” James Naughton 2016 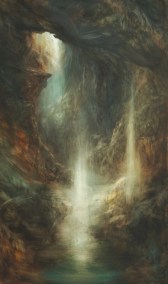 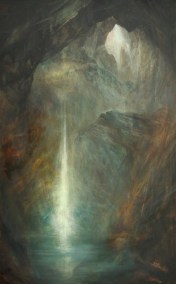 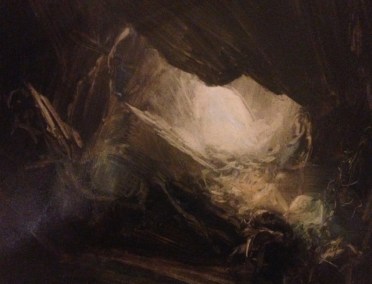