The Big Country
I’m sure that anyone who has followed this blog, through it’s various twists and turns, will have become aware that one of my main ambitions was to see how the experience would be communicated in a number of very large pieces. Even in the earliest drafts of the Arts Council application it was a key ingredient. I’ve worked on large commissions in the past but I was keen to see how a whole body of work would be affected by this eventual aim. I used prepared marine ply wood panels for all these big pieces, cut at 6ftx4ft, with a nervous bend I just about managed to fit them in the car.

I started them about a month before the exhibition was due to begin. I wanted to give myself enough time to complete them but also make sure that they would still maintain the vital energy of the smallest sketches with little time left  for procrastination or over working, it’s a dangerous strategy but has served me well over the years.

By this point it had been decided to arrange the Final exhibition in a chronology of the original journey with five main sections, The Tetons, The Canyon, Yellowstone Wonders, Green River and Buffalo. It occurred to me that it would be great if each of these sections might be presented around one large piece, defining the threads of each stage. 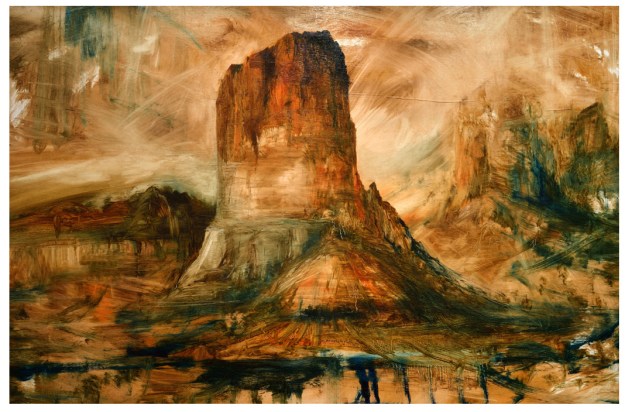 The first painting I attempted is this representation of Tollgate Rock. I had a strong sense of wanting to get something out of my system. It has since been likened to the “Devils Tower” mash scene from the film “Close Encounters of the Third Kind” and the painting did feel like a moment when my obsession with this place was released in a similarly intense way.

The Keen eyed among you will notice a thin scar across the board, I think this defect engendered the right state of mind to make this piece, rather than a flawless surface. I hope this blog has given everyone a sense of all these strange tricks that artists use to find the right place for their work to emerge. I’d be really interested to know if any of these mind games are employed by other artists?
So the “Tollgate Rock” piece became the first big work, a vital benchmark, by which I could judge the next experiments. I decided to leave it in this sketch like state, moving onto the other works, buoyed by it’s energetic grandeur.