Dreamworks
I am preparing to move up in scale from the Canyon studies. My thoughts keep returning to a dream I started to experience a day or so after first visiting the site. In the dream the RV was precariously balanced on the edge of a collapsing precipice. I can only think that I’d put myself through an experience that was initially difficult for me to comprehend. As I said in the diary post form the trip, the National Park has accomplished safely shepherding millions of visitors around sites of immediate danger. It’s a trick really because the various sites still challenge your instincts to survive but you’re brain is having to constantly override the natural fear. The dream continued to challenge my sleep patterns for a number of weeks after my return, in the end I was sad when it stopped as it felt like a final return to normality.
In most of Moran’s paintings of this subject the Canyon is viewed in all its glory and from a ‘safe’ platform, his compositions are wonderfully theatrical. Figures are used and as well as providing scale to the the enormity of the scene they invite you to experience both your own view of the whole image and a further imaginative journey to stand where the figures are. 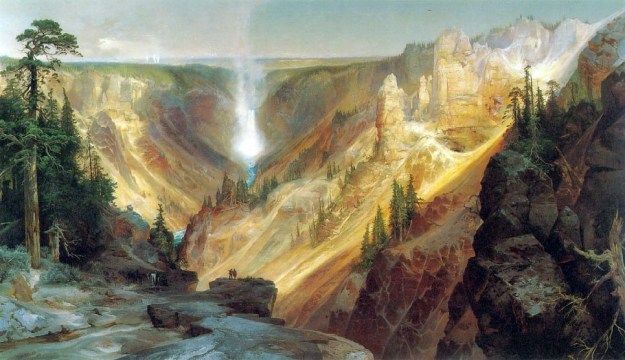 The Grand Canyon of the Yellowstone, oil painting, The Smithsonian American Art Museum 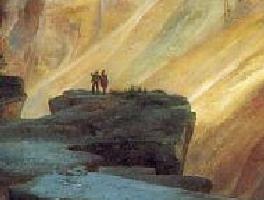 Figure detail from the painting above.

My studies so far seem to be pointing in the direction of being slightly disorientated, in the midst of the canyon, hopefully inducing feelings of being subsumed by the experience. These larger pieces have continued in that vein. Now and again there are periods in the studio when I feel complete freedom, as though there is nothing between me and the paint and this is one of those sessions. It’s fair to say that these moments are quite rare and, despite how good this feels, the experience of painting in this state of mind doesn’t guarantee good work, so it’s always important to come back to the paintings with an honest assessment of their merits. 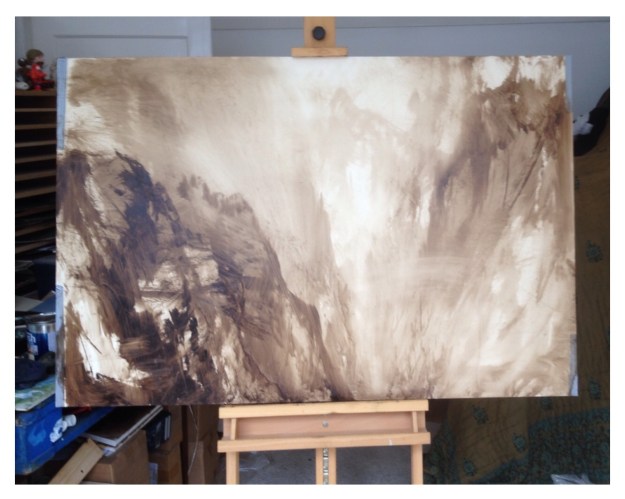 I am really happy with these and although I approached them as initial sketches I will leave at least one as a record of this stage. It’s good to recognise the value of something that is produced as a starting point but can have an immediacy, energy and power that could get lost by successive repainting. As soon as I put another brushstroke or colour over any of these an entirely new challenge emerges. A good example of this is when I’ve tried to repair damaged works in the past, it’s virtually impossible to engage with the original rhythm of a piece already completed. This can be annoying at times but I like the notion that each painting has a moment of creation, a secret easily forgotten. 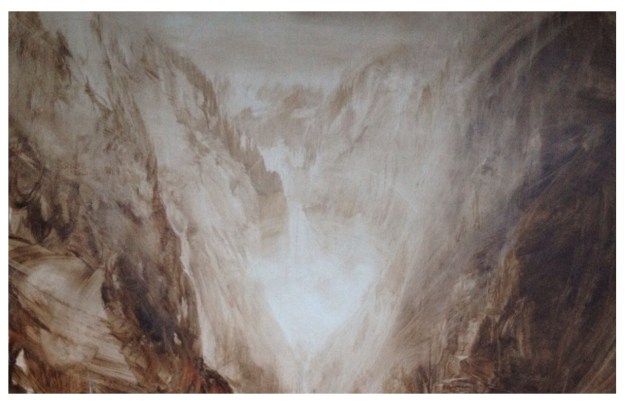