The Lost Canyon
After completing an initial sketch for the larger Canyon works I’ve been spending the last couple of weeks working with colour glazes over the umber base. I usually varnish after this first layer, this is great as I can move the colour around and wipe it from the surface without worrying whether I’ll damage the first layer. Each successive painting can subtlety add to what is there already or in some cases obliterate it. At every stage I try to remain open to various additions and even acts of destruction that can sometimes yield surprising results. 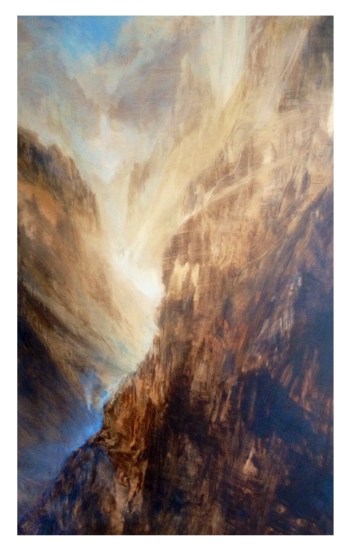 I paint in series normally four or five all the same size, so I get comfortable with the compositional space and the nature of how the marks relate to each other at that scale. The ideal is that all reach different conclusions of a high quality due to the ‘dialogue’ between them. Sometimes one can really stand out and this is equally successful, as the others will have played an important role in this outcome.
In one case, of this current crop of works, the painting moved through various stages, being honest I don’t think it got any better than the original ideas of the first meeting. All that was good about the piece slowly disappeared in front of my eyes. What is often most confusing about these studio periods is that I know I am just confounding the issues with the work and after a certain point there’s a relentless inevitability to the outcome. I’ll try and convince myself that something is just around the corner I can get to the point where I want it to be a skip! As I look at the pictures with this blog now I am thinking each stage was fine what was I thinking?

I suppose sometimes you just have to chalk these things down to experience. Nothing is wasted, when I thought I’d lost the battle I used much of what was in the work as a chance to experiment on a large scale waterfall study I’d been thinking about for a while. I filled the surface with white paint and integrated the subtle natural colours I’d already put down to suggest all the reflections on and refractions through the water. 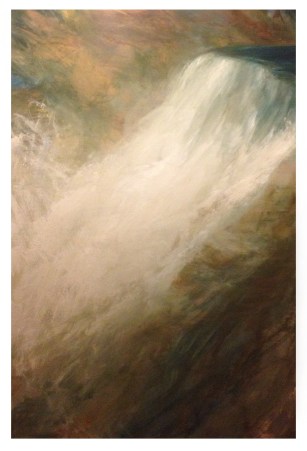 On the positive front the next session is normally filled with fearful vital energy, possibly trying to irradicate the memory of the difficulties. I convince myself that what felt like time wasted was actually just a question I wasn’t ready to answer yet. The solution probably eases itself into another painting, at a later date, with me blissfully unaware.