Born to be wild. Wildlife is a major consideration whenever travelling here either, by car bike or on foot. It’s good to approach your journeys with a warranted caution of the dangers you may encounter. In most situations common sense will serve you well. Big mammals such as Buffalo Moose and Elk can be unpredictable but rarely aggressive, unless they feel under threat so in most cases a safe distance will be enough to keep safe.

Anyone coming to either the Tetons or Yellowstone will be made instantly aware of the real threat from bears. Whether it be a Black bear or Grizzly, the visitor centres offer some great advice to make an encounter unlikely. Although not so long ago visitors would regularly feed them, giving rise to the popular cartoon characters Yogi Bear and Boo Boo, with their famed penchant for “Pic-a-nic Baskets”. Over time conflict incidents involving bears became much more common and this dependancy was very detrimental to the Bears, reducing their natural instincts to hunt and leaving them reliant on rummaging though waste bins. Strict rules, about food storage and disposal were established in 1970 and since then numbers of incidents have dramatically reduced.

Usually the Bears will also naturally try to avoid human contact now, so the advice is to walk in groups and make plenty of noise, so the Bears know you are around, especially if you are reaching a bend in the path. The rare incidents are usually when the Bear is surprised or protecting their young and in these cases walkers are advised to carry Bear spray which is like pepper spray and if dispensed correctly should prevent an attack. There are some stories of people spraying themselves with the bear spray, like mosquito repellent but I have a sense these are urban myths or perhaps rural myths. 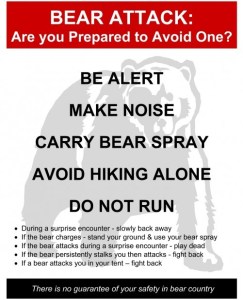 The Bear Warning signs in the Park.

To do any hiking, on the normal woodland trails I’ve had to ignore the advice on walking alone and in many cases I have not seen another walker. This has added to my sense of trepidation and after initially feeling stupid I am now very happy warning the Bears of my presence. I’ve even adopted a technique to make it sound like I’m in a big group where I shout “Hey Bear!” and “On your way Bear!” but I do this at lots of different pitches a bit like my favourite butcher on Bolton Open Market. It’s worked so far, it’s just that now I’m more scared of bumping into other humans who’ve just heard me.

There’s a great study on the National Geographic website, at the moment, where Bears have had cameras attached to a collar and you can see their journey through the park with some footage at various interesting points – https://www.facebook.com/NGM/posts/10154181777848336