As the trip culminated in the visit to Green River this was mirrored in it also being the last destination in the studio too. I got to this point feeling the pressure of the exhibition looming and also the challenge of creating work on a theme that was so central to the project it was at the back of my mind all the way through.

I remember having visits to see the gallery staff in Bolton and would get very nervous even looking at the Moran painting, knowing that whatever emerged from the next few weeks work would sit next to it in the final show. I also wanted to make sure that all the people of Green River who had given us such a warm welcome, in those finals days of the trip and at the civic reception, could feel as though I had captured something of this remarkable place.

It might have been easier to go out of my way and deliberately avoid depicting Tollgate Rock and the palisades, so as not to invite the inevitable comparisons in the gallery. I eventually came to the conclusion that it was the original dream to see this particular view and go on to paint it. I had grown in confidence by this point, knowing that what I produced would stem from a range of responses I had to the rocks when I was there and after returning to Bolton.

My main aim was to instil these paintings with an energy which would give an impression of the scene changing hazily from one moment to the next. The wonder of watching the sun’s last light reflected on the landscape is the speed of the changes we witness, a blaze of glory but also melancholy at the close of day. In my imagination the cliffs and tollgate rock had morphed into an ancient city scape, perfectly visible by day but only revealing it’s true beauty at this transition between day and night. The sun moves west leaving Green River cast in shadow but the rocks surrounding it glow ever more intensely like a last beacon. 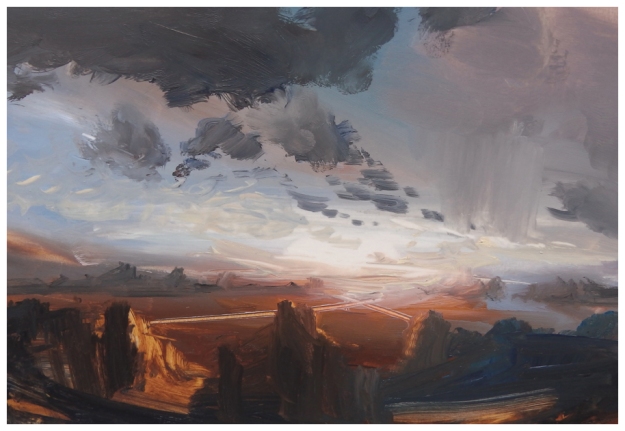 A last hurdle remained. I had always wanted to see how these subjects would transfer to very large works. Although I had produced more than enough work to make the exhibition a success wouldn’t it be fantastic if this final challenge could be realised on an epic scale?